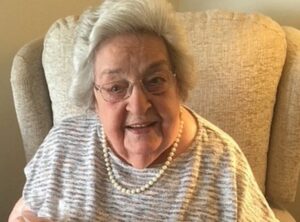 We are very sad to report that Eleanor Wadsworth, one of the last surviving pilots of Air Transport Auxiliary (ATA), died shortly before Christmas 2020 at the age of 103.  She served with ATA from June 1943 to the end of September 1945.

Eleanor spoke about her time in ATA in an interview for Maidenhead Heritage Centre filmed in 2011.   She was born in Nottingham and joined ATA as an architect in the Works Department at ATA’s White Waltham HQ, “designing parachute packing rooms, male and female toilets and rest rooms for pilots”.  When the department ran out of work she was one of the first 6 non-flying staff to be offered the chance to learn to fly.  She said “I always liked a new challenge” and so she went to ATA’s Initial Flying School at Thame and Barton-in-the-Clay.  After ground school, Tiger Moths and Magisters were used for her basic training with Dennis Lead as her instructor.  After being checked out by ‘Timber’ Woods (“a nice old boy”), lots of cross country practice was required before being allocated air taxi work in the Fairchild Argus.  Then back to school for high speed training on the Harvard and thus to the Hurricane, Spitfire, Hellcat, Mustang and others.  In all she flew 22 different types, with a total of 215 hours flying on 19 different single types and 86 hours on twin engine aircraft (Anson, Oxford and Dominie).

She never attempted any aerobatics (strictly forbidden), being happy to fly straight and level and “sit back and enjoy it”.  She loved the Spitfire, which she described as “remarkably subtle to fly” – although the check points went past very quickly.  Luckily she loved maps!  One aircraft she disliked was the Fairey Barracuda, a “remarkably ungainly contrivance”. Its bi-plane predecessor the Swordfish was “OK if you weren’t in a hurry”, but when she was allowed to take controls of a Liberator in which she was a passenger, it was “a heavy-handed kind of aircraft, a bit like driving a bus”.

Eleanor’s most worrying experience was when flying a Fairchild air taxi fully laden with 3 passengers, including Flight Captain Joan Hughes.  Immediately after take-off a piston came through the engine cowling, requiring a smart turn to the left in order to land successfully on a cross runway.

Eleanor was based for short periods at Sherburn-in-Elmet and Cosford, before settling at No. 6 Ferry Pool at Ratcliffe, where she found the Americans based there “very refreshing” and shared her family’s caravan with her friend Mary Wilson.  Most importantly she met her future husband Bernard Wadsworth, who was a Flight Engineer with ATA.   She and her fellow ATA pilots will for ever remain an inspiration to women everywhere.  Rest in peace, Eleanor.

“She has slipped the surly bonds of earth”